In his paper to the Society in April 1994 T K Jenssen (IFS Proc 350) described the work programme of the Task Force on BAT (Best Available Techniques) which had been set up by EFMA, the European Fertiliser Manufacturers Association. This paper gave the background to the regulatory initiatives, the definitions used, and the structure of the booklets. It is the purpose of this paper to extend the process described in that paper to the publication of the booklets. The three authors were involved in the writing of three of the eight specific booklets as experts from the Lead Companies.

In order that this paper may be self-sufficient, it is necessary to describe the process adopted by EFMA for the preparation of the booklets. The EFMA Technical Committee, with representatives from all the member companies of EFMA, decided to set up a Task Force. Member companies were asked to nominate experts to act as consultants to the booklets. The writing of each of the booklets was led by an expert, with 8 companies involved – each with one booklet to write. Experts from 9 companies provided consultation.

The authors from the lead companies prepared a first draft of the booklets using their own expertise. These drafts were circulated to the consulting companies in stages in order to spread the workload. Comments received from the experts were then used to re-draft the booklets. The Task Force met with EFMA and the Task Force coordinator on several occasions in order to:

Some aspects of these discussions are described below, but some important decisions were taken which have overall relevance.

Firstly, the booklets are limited to the process as a stand-alone unit. EFMA appreciate that there are opportunities which can be achieved by integration, as described for example by V Bizzotto However, the possibilities for integration are site-specific and it was the intention of EFMA to provide booklets which are of more general use.

Secondly, the limit values which are proposed only cover normal plant operation, and exclude transients such as start-up and shut-down. It is appreciated that such transients could be of environmental importance, but it was considered that the preparation of booklets which covered normal operation was a major task and the inclusion of transients would have given an unacceptable workload.

Finally, the booklets do not attempt to address any wider issues such as a complete life cycle analysis. This would have been a formidable task. 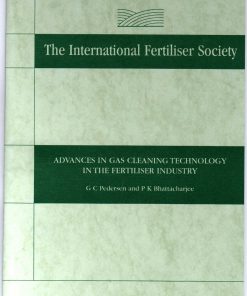 Advances in Gas Cleaning Technology in the Fertiliser Industry