Concentrations of phosphorus (P) in surface waters draining agricultural catchments were examined with respect to the concentrations likely to result in eutrophication of lakes and rivers. Evidence from lakes and the relationship between total phosphorus (TP) concentrations of lakes and inflows suggest that drainage concentrations in excess of 100 ug P/litre have a high probability of causing eutrophic conditions. The sensitivity of individual waters needs to be considered and standards closer to 30 ug P/litre may be required to avoid eutrophic conditions in certain locations. Phosphorus concentrations in streams were shown to increase as the proportion of land in the catchment devoted to cultivation increased or as animal stocking rates increased. Data from Finland and Northern Ireland show that flow weighted mean TP concentrations in excess of 200 ug P/litre were not uncommon in rural streams. These high concentrations are consistent with concentrations measured from experimental plots where phosphorus losses increase with phosphorus inputs, although the relationships between inputs and export are not uniform between areas. Despite the fact that P fertiliser inputs are no longer increasing in many regions, these regions continue to operate a P surplus, in that inputs exceed outputs, which is resulting in increased soil P levels. There is experimental evidence which suggests that increased soil P levels result in increased drainage P concentrations. This conclusion is consistent with observations from a number of areas where phosphorus concentrations in drainage water from diffuse sources have increased over time.

Reactions of Phosphate in Soils: Recent Research by TVA

Add to Wishlist
PROCEEDINGS: 75b 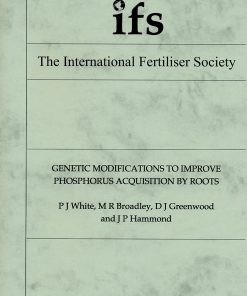