Dietary Nitrate: A Re-Evaluation of the Beneficial and Other Effects

Until recently, dietary nitrate was stigmatised by its chemical relationship to nitrosamines and methaemoglobin. However, there is no conclusive epidemiological evidence that dietary nitrates are causally linked to carcinogenesis, and methaemoglobinaemia is now recognised to be linked to endogenous nitrite production resulting from gastro-intestinal infection. Conversely, some epidemiological studies show a reduced rate of gastric and intestinal cancer in groups with a high vegetable based nitrate intake. There is also now a growing body of evidence from physiological studies to suggest a beneficial physiological role of dietary nitrate in the gastro-intestinal protection against food-borne pathogens, including Helicobacter pylori infection which is increasingly recognised to be associated with gastric malignancy. Clearly this makes it increasingly difficult to justify further reductions in the nitrate levels of drinking water from a human health point of view.

However, although the beneficial effects of nitrite in the prevention of diseases (see above) is likely to change the current negative perception of dietary nitrate intake, both from vegetables and from drinking water, the authors believe that a reasonable limit on nitrate levels in drinking and surface waters is valuable for environmental reasons. Legal limitation of permitted concentrations helps to promote good and improving agricultural practice, and measurements can act as an indicator of this.

Development of Legislation Affecting the Production, Distribution, Storage and Use of Fertilisers – The UK Experience

Add to Wishlist
PROCEEDINGS: 137a 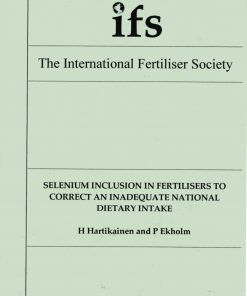