Ammonium sulphate is produced from many sources. This paper concentrates on ifs production as a so-called co-product or by-product as a result of other industrial endeavours. In order to define the scope for this review, it is important first of all to give some brief background and attempt some definition of the terms co-product and by-product.

As a fertiliser material, ammonium sulphate has a very long history. Its use dates back to the nineteenth century when it was obtained as a by-product from coking plants and gas works in most areas of the industrialised world. The first commercial synthesis started around the time of the first World War, and since then direct synthesis from ammonia and sulphuric acid has become a major production route. In the early days of the fertiliser industry, therefore, ammonium sulphate was a material already widely available in the industrialised countries, or otherwise simple to manufacture by neutralisation and crystallisation. It was therefore used in crystalline form as a material for direct application, and also as an ingredient for granular multinutrient fertilisers as these developed and in the powder blends of former times.

Today, a large proportion of global production is still made by direct synthesis, but co-product and by-product material from various sources accounts for more than 60% of production around the world. In addition to direct synthesis from ammonia and sulphuric acid, ammonium sulphate is also produced during the production processes for plastics and fibres intermediates – caprolactam, acrylonitrile and methyl methacrylate – in hydrometallurgy, in the treatment of flue gases and tail gases and sometimes from anhydrite or gypsum, both natural and by-product.

For example, in the manufacture of caprolactam, both ammonia and sulphuric acid are essential inputs to the process and ammonium sulphate is derived directly from the reaction products as an aqueous solution. Normally this is of such a quality that crystallisation is virtually all that is required to produce a product for sale. This is conventionally termed co-product material. By contrast, ammonia is a minor constituent of coke oven gas and it is normal to remove this to produce a gas for subsequent use. This can be scrubbed out with sulphuric acid and ammonium sulphate is then recovered. Ammonium sulphate from this source is usually referred to as by-product material.

Although these two examples suffice to make some differentiation between the two terms, the generation of ammonium sulphate from other process routes is not always so clear cut, as will be shown later in the paper. Nevertheless, some convention is employed, mainly for the benefit of statisticians who try to follow developments in the business. Thus, ammonium sulphate obtained from caprolactam or acrylonitrile manufacture is normally referred to as co-product, while that produced from coke ovens, flue gas desulphurisation, smelter tail gas and waste acid from methyl methacrylate is usually termed by-product.

As the scope of the paper encompasses both types of material, it is worthless to dwell too long on such pedantic principles and the reader is welcome to make whatever other classification he chooses. 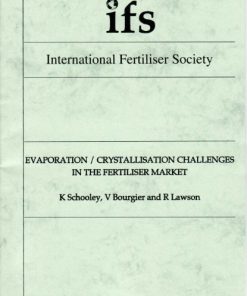 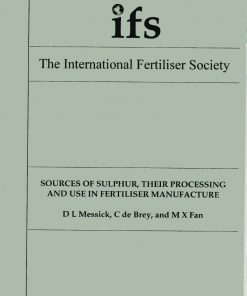 Sulphur Sources, their Processing and Use in Fertiliser Manufacture

Add to Wishlist
PROCEEDINGS: 10a