This paper sets out to offer a reasoned discussion of the prospects for the World Phosphate Industry for the remainder of the decade.

For many years, forecasters have been trying to represent fertiliser demand by a straight line always pointing upwards. Today, using this trend line to predict the demand just does not work any more. The simple extending of the trend line for phosphorus fertiliser has often been the source of numerous historical mistakes for both the production and the use of phosphorus. Therefore, as it becomes nowadays difficult to predict demand which depends largely on major economic and political events, it seems to me more appropriate to focus attention on the evolution of supply of merchant grade phosphate rock and phosphoric acid, worldwide to the year 2000.

At first sight, the title of this paper might sound either irrelevant or paradoxical. Indeed while the World Phosphate Industry goes through the worst crisis in its history, characterised by the enormous surplus of supply over demand and the lowest phosphatic fertiliser prices ever seen in twenty years, I am suggesting a reappraisal of the availability of marketable phosphate rock and phosphoric acid and considering whether there is going to be an adequate supply by the year 2000 of these vital commodities for world agriculture.

The issues raised in this paper are neither inappropriate nor paradoxical. They are very relevant issues which are likely to emerge strongly in the late nineties and might even become crucial by the turn of the century. On a global scale, phosphate rock geological resources are enormous and practically unlimited. They are currently estimated at sixty billion metric tonnes, a fact which is well known world-wide.

What is less well known but easily understood by professionals of the phosphate industry, is the fact that deposits which can be profitably mined at current market prices of less than US$40 per tonne of merchant grade phosphate rock, are too limited in quantity and suitable quality for feeding the existing or projected phosphatic fertiliser plants.

Good deposits of phosphate rock do still exist today, in proximity to good old mines in operation and having the cost advantage of equipment and facilities which have already paid for themselves. However, the capacities of production from such good old mines have been eroding fast because very few mines were opened in the last decade. The excess phosphoric acid capacity of today will gradually disappear because of the accelerated plant closures since 1990 and the constraints on new investments in the phosphate industry. 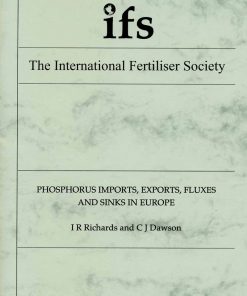