UK vegetable growers rarely use placed fertilisers despite their use in some other countries. This paper describes work which identified seedling nutrient stress as an important factor in causing site to site variations in yield, and then goes on to show how early growth and sometimes yield can sometimes be increased by placing small amounts of liquid fertiliser near to the seeds of drilled crops or around the roots of transplanted crops.

The results from several experiments are described in which nutrient deficiency was recorded even in fertile horticultural soils receiving the optimum rates of broadcast fertiliser. Sometimes such early deficiencies resulted in a reduction in final yield. The causes of the deficiencies can be related to the relatively slow root growth of vegetables, often combined with a high demand for nutrients from the plant shoot. In other experiments early growth and yield could be increased by applying starter fertiliser near to the seeds or transplants as they were established in the field. An attempt is made to identify those soils on which a response to starter fertiliser is likely, and also to investigate the factors controlling the retention or loss of an early benefit by final harvest. 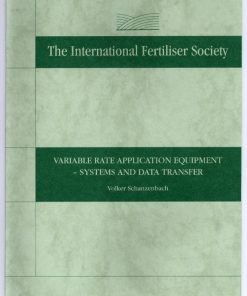 New Methods in the Distribution of Solid Fertilisers – A Survey

Investigations on the Agricultural Value of Nitrophosphate and Anhydrous Ammonia