The vigorous programme of work undertaken, during the last ten years, by the Atomic Energy Research Establishment, to produce radioactive materials for general distribution has, to a large extent, satisfied the expanding needs of many who have wished to make use of these materials. Some indication of this usage may be gathered from the fact that during 1955 there were more than 12,000 consignments of radio-nuclides and their compounds despatched from the A.E.R.E. centre at Amersham. The application of these materials to many problems being studied both in and outside the laboratory is now indicated by the large volume of literature which has been published in recent years. In particular, the significance of the industrial application of radio-isotopes is such that this is now considered as a separate branch of the general field of isotope utilisation.

As examples of the many diverse industrial problems to which radio-isotopes have been successfully applied there are: the study of lubrication efficiency in internal combustion engines, the continuous determination of paper board thicknesses and level gauges for glass furnaces. For these, methods have been evolved which can easily be applied and provide information more simply and quickly than is possible by other methods.

In the field of agriculture use of such isotopes as C14, S35, P32, and I131, by research workers studying the assimilation of plant nutrients by growing crops, has been of primary importance in assisting in a fuller understanding of fertiliser utilisation. Also, by the irradiation of seeds, hitherto unknown variants have been produced by mutation. Thereby it is hoped to obtain strains which have a high resistance to diseases. The present-day implications of this work have been gauged by Dr. Libby of the United States Atomic Energy Authority, who estimated that in the United States $200 million could be saved annually in the field of agriculture alone by using radiations from radioactive materials.

A more limited amount of information is available on the utilisation of radio-isotopes in work dealing with fertiliser production. Of that which is known, D’Leny, in a paper read to this Society in 1953, made mention of experiments which had been carried out at Billingham using radioactive sodium to trace various sizes of particles through a fertiliser plant drier. More recently, Brownlie described a technique wherein Na24 in the form of sodium carbonate was used to estimate the mixing efficiency of an Animal Feeding Stuffs Plant. This technique, he said, could possibly be applied to sections of granulation plants. Cook has also described the use of P32 to assist in the rapid sorting of basic slag for subsequent use as a fertiliser.

In all of these techniques use has been made of either beta or gamma radiations emitted by radio-nuclides produced by nuclear reactions in an atomic pile. A large amount of work has also been done making use of the naturally occurring radioactive isotope K40, present in all potassium salts, for the quantitative determination of potassium. Satisfactory analytical methods have been developed by Wilson et al. and Scheel for the determination of potassium in fertiliser samples and these will be referred to more fully later.

It was with this background of increasing application of radioactive materials to industrial problems that it was decided to examine known techniques to determine their applicability to the Fertiliser Works at King’s Lynn (UK). The various operations required for the production of fertilisers embrace many chemical and physical industrial processes and, from a superficial examination, it appeared that many of the problems associated with these might be more rapidly and simply solved using radioactive materials. Firstly, attention was paid to the two raw materials of the industry, namely rock phosphate and muriate of potash, which were known to have associated with them small quantities of radioactivity. Secondly, artificially prepared radio-isotopes were used in an attempt to determine some of the characteristics of a granulation plant and a wet-process phosphoric acid plant.

In this paper it is the intention to describe this work and report on the conclusions obtained. Finally, other applications will be suggested which, as yet, have not been tried out, but it is thought may be worthy of examination. 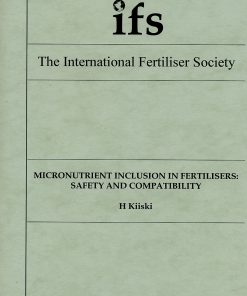