Storage and Distribution of Straight Ammonium Nitrate Fertilisers in Bulk

The storage, transport and distribution of straight AN-fertilisers started in the period 1935-1950 under troublesome circumstances.

The lack of knowledge about the behaviour of such fertilisers, exemplified by the inappropriate actions taken after the first signs of decomposition or fire (with bagged product in Texas City and Brest) and the use of dynamite to break up hard caked product (with bulk stored product in Oppau and Tessenderlo) was the cause of well-known disasters. Reference to these disasters is still brought up during negotiations on storage and handling, especially by persons who are not fully conversant with AN. Knowledge obtained during two or three decades of research has enabled conditions to be specified in which ammounium nitrate can be stored and handled safely.

Ammonium nitrate can be divided into two classes:

– high density particles (prills and granules), which are very resistant to detonation and can be safely used as fertilisers,

– products with a lower density (porous) which in combination with 7-9% of oil are used as blasting agents.

The EEC Directive 80/876-15.7.80 (2) gives a specification for material within the first of these classes that can be marketed within the Community. The Directive specifies a stringent detonation test that can be used by National Authorities as a final test of acceptance of the product. The introduction of the use of appropriate additives to ammonium nitrate, whose action is based on their waterbinding capacity, makes it possible to produce AN-products which do not contain free moisture. The consequences are that they show no caking tendency and are very resistant to thermal cycling damage. In the 1960s and 1970s production and distribution in bags as well as bulk increased in quantity. National Authorities and Manufacturers’ Associations provided Rules and Guidelines on how to handle such AN-fertilisers at the producer’s premises, during distribution and in storage by merchants and farmers. Since 1975 more and more of this kind of fertiliser has been transported and stored in bulk. This is justified by a better understanding of the physical and mechanical properties under practical conditions, and how to preserve these properties during distribution.

In this paper experience with bulk handling is considered. New insights into the rate and consequences of moisture absorption by the fertiliser are described, in order to contribute to a better understanding of the significance of hygroscopicity in relation to moisture uptake in practice. The need to prevent contamination with foreign materials and especially combustible substances is stressed. New guidelines for storage in bulk by local merchants and farmers are described.

As a general condition it is suggested that preserving quality is the best way to ensure safe distribution of straight AN-fertilisers. 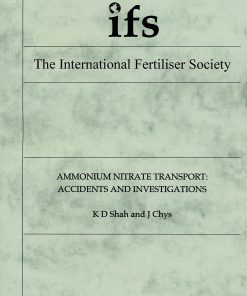