The phosphatic fertiliser manufacturing operations of The Tennessee Valley Authority represent the most interesting example in the world of large scale experiments into new methods of processing phosphate rock. T.V.A. rely almost exclusively on the indigenous phosphate rock of the region and on the hydro-electric power which is one of the main industrial manifestations of the complex of activities described in Mr. Sell’s paper. Whatever their economic justification, even under the unique circumstances prevailing, the T.V.A. processes represent an outstanding contribution to rite advance of phosphate technology.

Two main chemical types of manufacturing process can be distinguished and are described.

The first type is essentially a two-stage process. The first stage is the production of phosphorus pentoxide in forms suitable for its utilisation as a chemical reagent. It is so used in the second stage to break up the apatite structure of the phosphate rock, so as to make the phosphate readily available to plant life. In this type of process the phosphorus pentoxide not only acts as the disruptive agent, but also contributes to the fertiliser content of the finished product. An economic desideratum is that the quantity of phosphate in the form of reacting agent should be as small as possible in relation to the quantity of phosphate rock acted upon.

In the first stage phosphate rock is reduced to elemental phosphorus in an electric furnace, using coke as the reducing agent and sand as a flux:—

The phosphorus is — either at once or else later — burnt in air to phosphorus pentoxide:—

It is interesting to note that in the course of these reactions the orthophosphoric form of the phosphate is entirely destroyed and that potentially reconstituted.

Two examples of the second stage of this type of process are described:—

The phosphorus pentoxide is hydrated and used in the form of a 75/80% solution of phosphoric add (H3P04), the reaction being earned out at normal temperatures:—

The phosphorus pentoxide is used in the form of vapour, produced by the burning of elemental phosphorus, the heat of combustion of which is used to keep the reactants at a temperature of 1,000/1,200°C.

The water required in the reaction is supplied by that physically associated with the phosphorus as it comes from the condensers after the electric furnaces.

The second main chemical type of manufacturing process is a one-stage process in which the apatite structure of the phosphate rock is broken up by the use of simple non-phosphatic reacting agents. The manufacture of ordinary superphosphate is an example of this type, but in the case here described the reagents are even simpler, namely water and sand. The type of disruption of the apatite is chemically simpler also, namely the removal of the caldum

3Ca(PO+)3.CaF, + SiOa + H.O = 3Ca3(POJ3 + CaSi03 + 2HF From the chemical engineering standpoint, however, the process is difl&cult, the reaction being carried out with phosphate rock in the molten state at a temperature of 1,500°C. or more. The necessary heat is supplied by the combustion of fuel oil, the products of combustion of which supply all the water required in the reaction. The product, Fused Tri-calcium Phosphate (28% total P3Oj), has interesting and agriculturally useful properties.

One distinguishing feature of the T.V.A. phosphatic fertiliser technology is the relatively high degree of concentration, in terms of PsO content, of the materials produced. The extreme example of this is the production of elemental phosphorus, with a P O equivalent of 229%, by techniques which permit of its separation as such in form suitable for rail or road transport in bulk quantities. It is conceivable that this might become of practical significance in connection with the ultimate development of the vast phosphate reserves in the western United States. 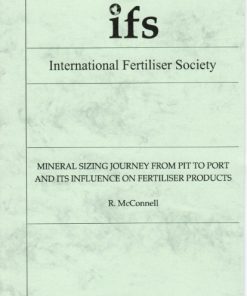 Agronomic Potential of Mineral Concentrate from Processed Manure as Fertiliser

Phosphorus Fertilisers from By-Products and Wastes

The Importance of Phosphate Optimisation from Mine to Market 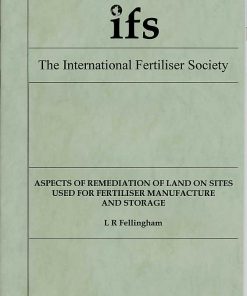 Application of Clustering to study fluorine losses in the phosphate industry